A Short History of IBR

One might not have suspected such an auspicious outcome back in 1970, when a few biblical scholars gathered for lunch during the SBL meeting in New York. The meeting was called by E. Earle Ellis, the founding visionary behind IBR. He dreamed of a North American based residential reference library (non-lending) similar to that of the Tyndale Fellowship for Biblical Research, Tyndale House Library, Cambridge, England. For the following three years, a small group calling themselves the Tyndale Committee discussed the viability of creating a residential library. In the end, they were persuaded that the library vision required a societal matrix to realize its goal, and thus in 1973 was birthed the Institute for Biblical Research.

The historical goals of the Institute for Biblical Research included fostering the study of Scripture within an evangelical context, establishing facilities for the furtherance of biblical studies, and encouraging university and college students toward a vocation of biblical scholarship. A key component of the initial vision was the creation of a residential reference library in North America for the study and research of biblical materials. This goal was realized in 2002 when a historic home on Southwestern Baptist Theological Seminary’s campus (Fort Worth, TX) became available. The library is currently up and running, but is no longer part of IBR. In a friendly separation, the IBR and the Earle Ellis Foundation (formerly IRLBR) exist as sister organizations with separate constitutions, meetings, and study groups. In 2012–2016, the IBR and the Earle Ellis Foundation collaborated to create the Young Scholars Summit, encouraging connection between the two organizations and fostering the development of junior biblical scholars. 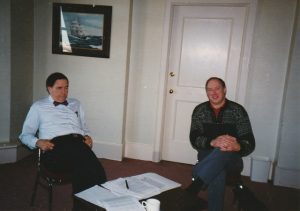 At IBR’s inception (1973), the group included about 35–40 members. Membership was by invitation only, with the sponsorship of two current members. Each member needed to affirm InterVarsity Christian Fellowship’s statement of faith, and hold an appointment as a doctoral candidate or teaching position in the biblical field. Full membership was granted to those engaged in biblical research at the level of assistant professorship or above, while graduate students could become associate members. In 2016, Masters level students were included in the category of student members. By 1976, the original membership had more than doubled to 83 members. In 1994, the number had grown to 311 Fellows and 90 Associates. By 2018, IBR had 475 Fellows, 107 Associates, 25 Friends, 39 Senior Fellows, and 16 Student Members for a total of 662 members.

The IBR annual meetings occur in conjunction with the SBL annual meetings. Initially the IBR annual meeting included a luncheon lecture given by a prominent evangelical scholar (not necessarily an IBR member). Later a Friday evening banquet and lecture by key evangelical researchers were introduced, followed on Saturday morning by two major papers and formal responses representing both the Old Testament and the New Testament. In 2014, the format of the Friday evening lecture shifted to having two responses during the evening session and IBR piloted IBR Unscripted, a TED-Talk style event on Saturday morning. Beginning in 2001, IBR began a Sunday morning church service open to all (both IBR and non-IBR members). In 2011, IBR added Friday Afternoon Research Groups to provide an opportunity for IBR members to work together on research topics toward publication. In 2014 and 2015 respectively, IBR began an annual IBR Women Scholars Breakfast and an annual Ethnic Minority Scholars Breakfast to encourage connection and promote scholarship among IBR women scholars and among IBR ethnic minority scholars. 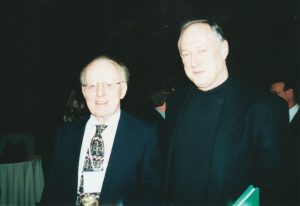 Gerald Hawthorne and Klyne Snodgrass at the annual meeting

Publications have long been a primary concern for IBR. In 1989 it launched the Bulletin for Biblical Research (BBR) under the editorship of Bruce Chilton, published by Eisenbrauns. The first journal was published in 1991. In 1994, Craig Evans continued as editor and advanced BBR to a bi-annual journal. In 2005, Richard S. Hess took over editorial responsibilities, significantly enlarging the journal. The BBR Supplements Series began in 2007 with the appearance of its first monograph. In 2014, Craig Keener took over the position as editor of the BBR and Nijay Gupta beginning in 2019. Many of our IBR Research Groups have published volumes over the years with BBR and with various publishers.

Membership in IBR has also increased its advantages over the years. Members receive the Tyndale Bulletin and the IBR Newsletter, which lists all current members and their publications, announcements and congratulations to members and memorials. Starting in 2016, members also receive a special IBR member discount for products with all three of our partnering publishers (Baker/Brazos, InterVarsity Press, and Zondervan). We are thankful to our publishers for providing IBR members with a free book each year as well as hosting the IBR Reception after the Friday evening lecture.

IBR continues to innovate and grow over the years, while we maintain our founding goals “to foster excellence in the pursuit of Biblical Studies within a faith environment.”

The IBR Board consists of 13 members who are voted on by the membership and manage IBR’s activities and affairs.